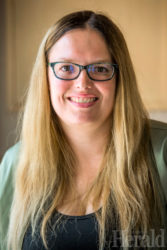 Dave Mabell
Lethbridge Herald
dmabell@lethbridgeherald.com
An environmental science professional has been named the Green Party of Canada candidate for Lethbridge in this fall’s federal election.
Stephnie Watson, a business owner who graduated with a master’s degree from the University of Lethbridge, says she intends to hold sitting MP Rachael Harder and the Conservative Party of Canada accountable for their record and current positions on environmental issues.
Canadians — including southern Alberta food producers — face real challenges in the face of climate change, she points out. Those issues are being raised increasingly by Lethbridge-area residents, Watson says.
“People want their voices heard.”
Southern Alberta producers are already experiencing the impact of climate change, Watson says. With weather patterns becoming more extreme, there’s an increased danger of drought as well as severe storms and hail.
And as summer temperatures and humidity climb, crops will be affected in different ways.
A Lethbridge resident for 17 years, Watson is owner and operator of Sherlock & Watson Scientific. The company aims at providing easily accessible scientific information to the public, businesses and governments — as well as contributing to furthering environmental scientific research.
Watson has also researched potato viruses and soil issues at Lethbridge’s federal research station. And after experiencing the failure of the federal government’s Phoenix payroll system, Watson says the Conservatives must be held to account for approving its introduction.
“There are hundreds of thousands of people who were affected” — and if the federal government can get away with that, what about private employers?
As an entrepreneur, Watson has been able to remain in Lethbridge. But after earning their degrees, many students have to move away.
“The opportunities aren’t here,” but the Green Party would promote local initiatives. At the same time, Watson says the national party is calling for retraining programs for people no longer needed in the declining oil and gas industries.
“Many people could transition to renewable-energy jobs with very little retraining,” based on skills they already have.
After seeing the Harper Conservative government muzzle scientists at the Lethbridge station and federal facilities across Canada, Watson stresses the importance of basing policy decisions on proven evidence.
Opioid use has become a crisis right across Canada — not just in Lethbridge — and Watson says the “four pillars” approach is proving the most successful. Taking away the first pillar, a supervised site, could result in needle debris and overdose deaths throughout the city.
“I am excited to be given the chance to work for the people of the Lethbridge electoral district,” Watson says — “To make voices that feel unheard, heard, deal with the misinformation being spread by current public figures, and to put forth well-researched ways to make our society sustainable and accessible to everyone.”
Follow @DMabellHerald on Twitter