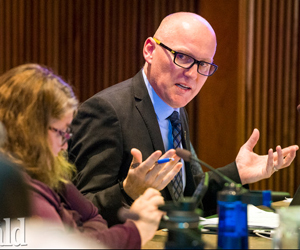 Councillor Blaine Hyggen speaks before the vote on his resolution regarding funding for the supervised consumption site during Monday's council meeting at city hall. Herald photo by Ian Martens @IMartensHerald

Tim Kalinowski
Lethbridge Herald
tkalinowski@lethbridgeherald.com
Lethbridge City Council rejected Coun. Blaine Hyggen’s motion to ask the province to prevent ARCHES from allowing needles to leave the supervised consumption site and to suspend funding to the SCS pending a provincial review.
The motion, co-sponsored by Hyggen, Coun. Ryan Parker and Coun. Joe Mauro, was defeated by a vote of 6-3 following a strenuous debate in a packed council chambers, with supporters and those opposed to the SCS present in the gallery and also in the overflow space in the city hall foyer.
Extra security and police officers were on hand to ensure order as the debate got underway, with Hyggen presenting the motion and asking for questions.
Hyggen and Mayor Chris Spearman clashed over what the mayor called Hyggen’s false information and unsourced references in his comments to introduce the motion, and in earlier comments Hyggen had made to the media leading up to the debate on Monday. Coun. Rob Miyashiro asked the co-sponsors of the motion, “Did you want our most vulnerable people in the city to die?” He asserted that is what would happen if the province eventually closed the SCS.
This drew a withering rebuke from Mauro who said, “Of course, no one here in this room wants anyone to die.”
Mauro then questioned if the SCS was actually saving lives in the end just because it happened to reverse five overdoses in a day for one particular addict, when the addict merely returned to do it all over again the next day.
Parker, who called in via phone-conferencing to take part in the debate, said the current SCS model was not working, and it was simply creating a marketplace for drug dealers and users to come together outside the building, and leading to increased crime in the city. He said by passing the motion council would be signalling clearly to the provincial government better solutions were needed to address the drug crisis in Lethbridge.
In the end, Coun. Jeff Coffman provided the voice of reason, cooling down the temperature in the room prior to the vote.
“I want to take the opportunity to thank Coun. Hyggen for bringing the motion forward,” he said. “I know he has taken an awful lot of critique and criticism for bringing this forward, but this is our job. If the community approaches any of us to bring this forward, this is actually doing your job. I know you (Hyggen) have taken a lot of crap and abuse over it, but you have done what the voters are actually electing you to do.”
Coffman put the consequences of having a divided community forward for council’s consideration.
“We seem to be a community that is losing empathy, empathy for those struggling with addictions, mental health and homelessness,” he said. “We are losing empathy for those who are invested in the community, dedicating themselves to producing goods and services, and creating a living. We are also starting to vilify people — we are starting to vilify people in the business community because they are frustrated, they are angry, they are worried. And we are vilifying a non-for-profit organization who is trying to do something during this crisis, and that really concerns me, because that is not the way a good community moves forward.”
Coffman said he was voting against the motion not because those with concerns about the SCS were entirely wrong, but rather because the province has already announced it will keep funding supervised consumption sites pending the province’s SCS panel report due out in September, making the motion redundant for the time being.
Hyggen said after the vote had concluded he was pleased everyone had their voices heard in the discussion, both on council and among those out on city hall lawn protesting prior to the council meeting.
“To see that today, and it does not matter what side you are on, to show democracy in action is amazing,” he said. “It was fantastic to see those people come out and stand up for what they believe.”
Spearman said what he takes away from Monday’s debate and protests outside city hall is the importance of coming together as a community to seek more resources from the province for supports beyond harm reduction, with all sides agreeing there was a crucial lack.
“We are hopefully going to unite and work together on the strategies to address the drug issue,” he said. “The new provincial consultation process was announced today; so I think what we have to do is provide a united input. We need to have people from the community participating in that. (This drug crisis) has impacted Lethbridge more than any other city. The challenge for the province is: Are they going to put the resources into this? How do they help us turn this around? I think the most expensive option is to do very little and allow addiction to continue to waste lives and raise the costs of health care, and go unabated for years. There has to be a strategy to address this issue and turn things around.”
Follow @TimKalHerald on Twitter