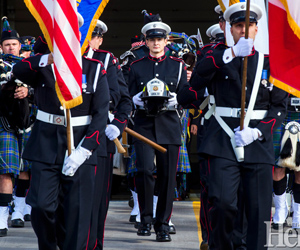 Firefighter Neil Soklofske, centre, holds a helmet as he and other fellow Lethbridge Fire Department honour guard and pipe & drum members start out from fire headquarters in a parade of first responders marching to Southminster United Church Wednesday as part of the Fallen Firefighters Memorial Ceremony. Herald photo by Ian Martens @IMartensHerald

Tim Kalinowski
Lethbridge Herald
tkalinowski@lethbridgeherald.com
The Lethbridge Fire and Emergency Services Honour Guard held a solemn memorial service at Southminster United Church on Wednesday to honour those among the firefighting ranks who have fallen in the past year, and particularly the members or former members who have fallen in Lethbridge.
As the list of names were read out in the church accompanied by the tolling of the memorial bell, a pattern emerged among the list of the fallen: cancer.
When people usually think of firefighters fallen in the line of duty, it is generally in relation to traumatic injury due to accident, structural hazard, or all the terrifying risks which come from battling flames and smoke. However, as the long list of names and causes of death read out on Wednesday showed, cancer related to these firefighters exposure to carcinogens on the job is by far the greatest killer.
“Cancer is a big problem,” acknowledged Lethbridge Fire Chief Marc Rathwell, “and we are really doing everything we can. We have a cancer mitigation program we have put into our department trying to minimize all of our exposures from fires or hazardous materials that we can.”
This includes cancer awareness initiatives for members, and stringent equipment and self-cleaning protocols after every fire event.
“We take every preventative measure we can,” agreed Lethbridge Local 237 International Association of Fire Fighters president Warren Nelson. “It used to be the dirty turn-out clothes and a dirty helmet was a sign of your work and getting deep into the fire, and getting dirty, and leaving it dirty.
“But we now recognize that dirt is carrying the carcinogens that are killing us; so we have a stringent cleaning program and policies and procedures where we wash right after a fire to get all those carcinogens totally off us, and continue to maintain the cleanest atmosphere we can.”
Nelson said cancer tops the list of his members’ concerns about long-term risk of work-related illness or death.
“Firefighters are at a higher risk to get certain types of cancers, and the WCB has recognized that throughout Alberta,” Nelson explained. “If we contract one of those cancers, it’s deemed to be in the line of duty. Skin absorption, we are finding, is one of the biggest ways that we’re getting in contact with those carcinogens. We as firefighters are still dying from everything from motor vehicle collisions, building collapses, the fire itself, smoke inhalation, but cancers are becoming the prevalent cause of death amongst firefighters.”
Every year the Fallen Firefighters Memorial Ceremony honours those who have passed in the previous year due to circumstances encountered in the line of duty. This year in Lethbridge the service honoured former platoon chief Don Carpenter, who died from work-related cancer in April 2018. Carpenter had spent 34 years on the force prior to his retirement and eventual passing. Carpenter’s name has now been added to the wall of the fallen at the Canadian Firefighters Memorial in Ottawa, confirmed Nelson, and will be added to I.A.F.F. memorial wall in Colorado Springs this coming weekend.
Follow @TimKalHerald on Twitter

One Response to “Cancer from carcinogens greatest killer among firefighters”