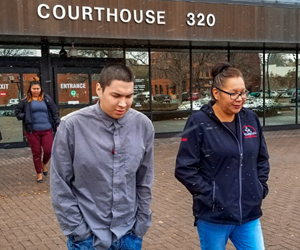 Delon Shurtz
Lethbridge Herald
dshurtz@lethbridgeherald.com
A manslaughter charge against a Lethbridge man was dismissed Tuesday after the judge ruled his recorded statement to police and his re-enactment of the beating death of Kenrick First Rider two years ago were not given voluntarily.
Rylan James Twigg, 25, walked out of the courthouse a free man after Justice Johnna Kubik announced her decision following nearly five weeks of hearings in Lethbridge Court of Queen’s Bench to determine the admissability of the statements.
“Based on a contextual analysis of all the circumstances, I am not satisfied beyond a reasonable doubt that Mr. Twigg’s statements of Nov. 28, 2017, were voluntary,” Kubik said. “Accordingly the video-recorded statement, that statement continuation and re-enactment, both dated Nov. 28, 2017, are inadmissible and are excluded from the trial proper.”
During lengthy voir dire — a trial within a trial — Lethbridge lawyer Ingrid Hess had also argued police breached Twigg’s Charter rights by not ensuring he understood his right to counsel and his right to remain silent. Given her ruling on the voluntariness of Twigg’s statement and subsequent dismissal of the charge, Kubik said she no longer needed to address the Charter application.
Although the Crown argued Twigg was not coerced or offered inducements for his confession, and he knew what he was doing when he talked to police and understood the potential consequences, Kubik said the officer should have recognized Twigg’s cognitive deficits and realize he did not understand the seriousness of the circumstances.
Kubik referred to many of Twigg’s cognitive deficits, and noted he was also intoxicated at the time of his arrest and had taken fentanyl only one hour before he turned himself in to police at about 5 p.m. Nov. 27. He was also ill the following day, possibly from withdrawal, and threw up during his interview and re-enactment.
Following Kubik’s decision, Crown prosecutor Michael Fox told court he wouldn’t call any further evidence against Twigg and he invited the judge to dismiss the charges.
As Twigg walked out of the prisoner’s dock, he was greeted with hugs from emotional family members.
“We’re just so happy Rylan is out,” one family member said as they left the courthouse.
Hess was also elated and even a little emotional as she talked to reporters following the decision, and said it was a “pretty lovely moment to witness him being freed in the courtroom.”
Hess said defence worked hard, and even had Twigg assessed by a mental health professional to show the extent and impact of his cognitive deficits.
Although charges against Twigg are dismissed, co-accused, Simon Danny Scout, who is also charged with manslaughter in First Rider’s death, remains on trial. His case returns today when the Crown is expected to announce how it will proceed and whether it will call any further evidence in the trial, which began Sept. 3.
Scout’s lawyer, Vincent Guinan, told court he has several witnesses lined up to testify beginning today, should the trial proceed. He also has witnesses scheduled to testify in January.
Follow @DShurtzHerald on Twitter