An animal environment for humans 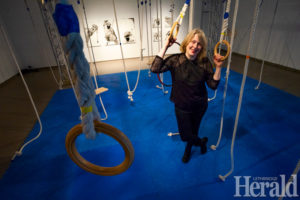 Humans will often create enclosures to study animal behaviour, test cognition and examine responses by manipulating a lab-study animal’s environment. The result is often a created space where we as humans try our best to mock something up which we think will be pleasing to the animal.

Icelandic visual artist Gunnhildur Hauksdottir, in collaboration with the University of Lethbridge Art Gallery and behavioural research scientists Louise Barrett and Miranda Lucas, turns this concept on its head by trying to think of how one would create just such an environment for humans.

“What you see here,” says Hauksdottir pointing to an apparatus with various ropes and rings hanging off it in the centre of the gallery, “is a sort of man-made enclosure similar to how we make an animal enclosure. This is an enclosure that a man imagines a monkey can have fun in. And then I put humans in it, and humans perform in it. Whether they know it or not, those who come out are in my animal enclosure, and they really want to play in it.”

“The idea was to create this space that was incredibly welcoming,” agrees gallery director and curator Josephine Mills. “If you think about what they do in zoos when they try to create an environment animals would find inviting; so it’s kind of the same idea here. It’s an environment which is inviting to people. People can swing and climb the ropes, and play.”

The exhibit, entitled “Borderline Human,” also draws inspiration from Lucas and Barrett’s vervet monkey research in South Africa. As part of her preparation for the installation piece, Hauksdottir visited Barrett, who holds the U of L Canada Research Chair in Cognition, Evolution and Behaviour, in the field. The drawing of these monkeys Hauksdottir saw in South Africa border the central installation piece, their voices are heard on speakers throughout the gallery, and they star in an accompanying VR film, which allows the viewer to enter the real-life monkey enclosure where Barrett’s research subjects play.

Mills said the collaborative final art piece will hopefully redefine what a gallery space is for all those who come out to take part in “Borderline Human.”

“I am really interested in how you can get people to engage with contemporary art,” she says. “A lot of the times with contemporary art spaces it doesn’t feel welcoming (to an outsider). What we are doing is looking at is how people behave in art galleries so we can better understand how they will engage. We are using the same techniques (Barrett and Lucas) use to study these cute, little, black-faced vervet monkeys in South Africa. So the two things came together with the artist.”

Admission to “Borderline Human” is free to the public, and the exhibit runs until Friday, Oct. 18 at the University of Lethbridge Art Gallery. There will also be a special performance by a dancer and aerialist within the space to close the show on the final day of the exhibit starting at 7 p.m. The public is welcome to attend.

One Response to “An animal environment for humans”