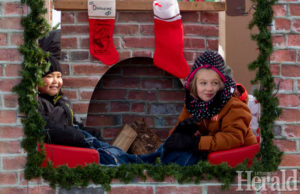 Herald photo by Greg Bobinec Children enjoy the warmth of their makeshift library livingroom while strolling through the streets of Fort Macleod for their annual Santa Claus Parade, Saturday morning. @GBobinecHerald

Greg Bobinec
Lethbridge Herald
gbobinec@lethbridgeherald.com
Fort Macleod welcomed thousands over the weekend as they kicked off their holiday celebrations and paraded through the streets for the 38th annual Santa Claus Parade.
For almost four decades, the Town of Fort Macleod has hosted holiday celebrations throughout the town site and welcomed surrounding communities to take part. This year, the annual Santa Claus Parade was over an hour long, with hundreds of people decorated in holiday decor and handing out candy.
“The parade was wonderful, we had over 85 entries and eight choir and band groups that were able to come as well, with nearly 900 band members participating in the parade,” says Ashley Nelson, parade co-ordinator. “It is amazing to see so many people line our streets. We figure between ten and twelve thousand people came out. It’s so fun to see and you always run into people that you know, it brings a lot of attention to our little town and we love that.”
The weekend of holiday celebrations started Friday with a market held at the local middle school, and in the evening, the town opened up downtown for their Moonlight Madness celebrations with late-night shopping through downtown, wagon rides, bon fires and community celebrations. Before the parade Saturday, the town hosted a pancake breakfast, and in the evening, the Empress Theatre hosted a free movie night, and the town invited the community back for a community dance at the town hall.
The Town of Fort Macleod has hosted their annual Christmas festival as they see themselves as a central hub for smaller communities in southwestern Alberta. Not only do some of the small communities come out to the celebrations, but bigger cities are drawn to the celebrations and take part in the parade.
“It’s tradition, everybody’s family comes home this weekend and it just kickstarts the holiday season for a lot of people around here. Fort Macleod is a nice central location and so we are a good location for everyone to come out and celebrate,” says Nelson.
“It is also great to see a lot of the surrounding communities get involved and a lot of the big bands are from Calgary, so it brings a lot of people from up there down as well. It is a full weekend for our community, but it’s a good way to enjoy each other’s company.”
For many families, the Santa Claus Parade and the Christmas Festival is a way to mark the beginning of the holiday season, as they make their way to Fort Macleod to get into the holiday spirit.
“Our family has come down every year for at least the last decade and we love it every year,” says Kathy Emerits. “The kids have loved coming to the parade and the events every year, it has become a tradition in our household. The town is so busy, everyone is happy, and we always know we are going to have a good time.”
The Town of Fort Macleod braced well for the thousands of cheer-filled people who lined the streets to take in the parade, shop, and spend time with their families before the holidays go into full swing. Organizers of the annual parade and festival would like to thank all of the dedicated volunteers who make the festival come to life every year.
Follow @GBobinecHerald on Twitter