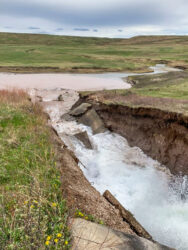 United States Bureau of Reclamation photo - The last of five drop structures that move water through the St. Mary Canal to the North Fork of the Milk River is seen before and after its failure recently northwest of Cutbank, Montana.

The provincial government is assessing the impact of the recent collapse of vital water transportation infrastructure in Montana on the Milk River basin and its nearby communities, says Associate Minister Grant Hunter in a statement released to The Herald on Friday.

“I want to assure my constituents that their government is aware of the evolving situation along the Milk River and is taking this matter very seriously,” the statement reads in part. “The Ministry of Environment and Parks is currently working to assist in the management of the situation, and will be conducting a flow assessment on the Milk River to determine water availability risks over the next few weeks.”

Water flows from the U.S. side of the border from the St. Mary Canal through a series of five “drops” into the North Fork of the Milk River. Water received from this diversion makes up about 80 per cent of the flow of the Milk River on an annual basis. With the failure of the “Drop 5” structure, the Milk River has been reduced to its natural flow state only, representing a potential serious shortage of water in communities and irrigation areas on both sides of the border.

The most heavily affected communities on the Canadian side are the Town of Milk River and the Village of Coutts, but other water users may also be significantly impacted the longer the collapsed infrastructure remains unrepaired.

Hunter says the Alberta government is working in concert with local communities and stakeholders to share information and monitor the still-evolving situation.

“Environment and Parks has contacted all known water users in the Milk River Basin to inform them of the diversion failure and possible impact of water supply over the summer months,” Hunter’s statement continues. “They will be providing updates to ensure the safety of all water users and will be advising if and when further mitigation measures require to be taken.”

According to the Milk River Watershed Council, the flow of the Milk has already been cut in half since the collapse was discovered over the May long weekend, and will likely drop even further as spring runoff concludes and ground water from recent rains dries up.

Hunter says he will continue to communicate with affected communities and water users in the coming weeks as new developments occur.

“This morning (Friday) I met with the mayors and reeves of areas affected to discuss their concerns and hear their suggestions on a path forward,” Hunter’s statement concludes. “I will continue to engage with them over the coming days and weeks as the situation evolves.”

The failed infrastructure falls within the jurisdiction of the U.S. Bureau for Reclamation. It is not clear as yet how the province or federal government intends to work with the Bureau to assist with the timely repairs needed under these circumstances.

The International Joint Commission on Transboundary Waters regulates all relationships between Canada and the United States when it comes to shared waters.