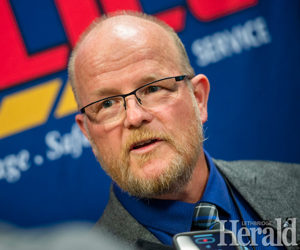 Tim Kalinowski
Lethbridge Herald
tkalinowski@lethbridgeherald.com
Former Lethbridge Police Service Insp. Jeff Cove (ret.) has been named as the The Watch program’s new manager.
Cove, who retired from the police service six years ago after 35 years in policing, said he was drawn back to The Watch last year as a volunteer because he wanted to serve his community in a new way. He hoped as manager he would be able to help make Lethbridge’s streets a bit safer and kinder for all residents.
“One of the key things out there right now is lots of people feel they are not safe in certain areas of the city,” he said during his formal introduction at LPS headquarters on Thursday, “and with The Watch the people are there providing all the services they do.
“The de-escalation — sometimes we see people with bad behaviour in the downtown area and sometimes de-escalation helps; finding the connection to the proper social services they require, finding them the things they need in life so many of us can take for granted. So the business people can carry on with their business. The people who go downtown to go shopping or visit downtown can do so and feel safe. And also the people that tend to feel marginalized in our community; so they can get on with their business and their goals of living their lives the best they can every day.”
Cove acknowledged The Watch manager position might only be short-lived if city council decides not to continue funding the program after 2020. Budget deliberations on that point will take place this fall.
“For me, coming into take up a position as one year; I hope it carries on,” he stated. “I am going to do my best to ensure the measuring sticks by which the program is measured are out there, and we hit those bars, and are able to show that our service is something which is beneficial to the city and the people. And by that way, getting the funding to carry on and go forward. Hopefully, that will be me when the one-year term is up, but if it’s not it is still no harm, no foul for me. It’s an opportunity to give something back to a city that gave me lots.”
Follow @TimKalHerald on Twitter