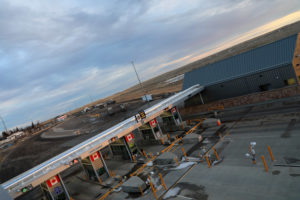 Business as usual for stores in Milk River and Warner

Rumours of snowbirds stocking up on groceries in Milk River and Warner after crossing into Canada at Coutts aren’t true, say operators of markets in those communities.

Jason Lynn of Riverside Market in Milk River said he’d had a phone call from a person about that rumour and he quickly dispelled it.

An employee at the Warner market said all of her customers are locals.

Lynn, who along with his wife Sue have owned the Milk River store for a decade, said his customer base hasn’t changed since the COVID-19 pandemic prompted a closure of the Canada-U.S. border to most traffic.

“A ton of traffic goes right by” the community which is no longer on the highway, said Lynn, who hasn’t run short on popular items such as toilet paper.

“It’s been business as usual,” he said, adding he’s not seeing any strangers in town. With no parking lot, shoppers have to park on the street and he can easily see who and what is parking in front of the store.

With some families in the area having many children “who am I to say you can’t get one more pack of toilet paper,?” he asked.

Snowbirds, however, appear to be flocking to the southside Walmart in Lethbridge. On Wednesday morning, two Herald staffers saw motorhomes parked in the store’s lot, at least one with B.C. plates. The paper also had a call earlier this week from a person concerned snowbirds may be stocking up on groceries before self-quarantining for 14 days.

For Lynn, the way he takes care of his customers during the crisis will continue pretty much as normal. One exception will be the way staff handles delicatessen meats. Instead of slicing to order, they are pre-cutting and packaging meats for customers.

“We’re trying to accommodate people as much as possible,” said Lynn, whose business takes special orders and does deliveries.

“If you need special orders, we’ll do it for you. .. we want this not to be as bad as it could be.

“I’m feeling pretty good about everything,” added Lynn whose store services people in his town, as well as areas including Coutts and Foremost.

An employee greets customers at the door, offering them hand sanitizer and gloves if they want. They also provide tissue or gloves for people who use the Interac pin pad at the tills.

With tourism important to Milk River during the summer, Lynn is “hoping things get back to normal.”