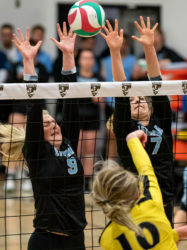 Lethbridge Herald
In a two-game, 10-set marathon, the Lethbridge College Kodiaks women’s volleyball team emerged with a pair of wins.
The Kodiaks went five sets against the Medicine Hat Rattlers in Alberta Colleges Athletic Conference play Saturday night in Medicine Hat before coming away with the 3-2 win.
It was the second night in a row the teams slugged it out in five sets after the Kodiaks rallied from being down 2-0 to win in five sets Friday night at the Val Matteotti Gymnasium.
The wins improve the Kodiaks to 6-16.
On the men’s side, the Kodiaks also earned the sweep with a five set win to take over first place in the ACAC South at 17-3, two points up on the Red Deer Kings (16-4) and the SAIT Trojans (16-6).
On Saturday in the women’s game, the teams swapped set wins as the Kodiaks won the first and third sets, while the Rattlers responded with second and fourth set wins. The Kodiaks prevailed 15-10 in the fifth to secure the 2-0 weekend.
Jamie Brown had 13 kills for the Kodiaks and Mack Lewicki had 12. Claire Armstrong and Rae Whitehead chipped in with 10 kills each.
Lewicki, Brown and Sarah Hazen had 22, 20 and 18 digs, respectively and Johanna Dixon had four service aces.
Like the women’s game, the Kodiaks men won the first and third sets and the Rattlers took the second and fourth sets before the Kodiaks closed it out with a 15-11, fifth-set win.
Carter Hansen hammered 28 kills and Nolan Moes hit for 13 and Michael Hummel had 10. Moes also had four service aces.
Zach Wikenheiser had 13 digs in the win.
The Kodiaks return to the court Friday when they travel to Calgary to take on SAIT as the men clash as the top-two teams in the South.
The teams are back at the Val Matteotti Gymnasium Saturday night with the women’s game at 6 p.m. and the men at 8 p.m.